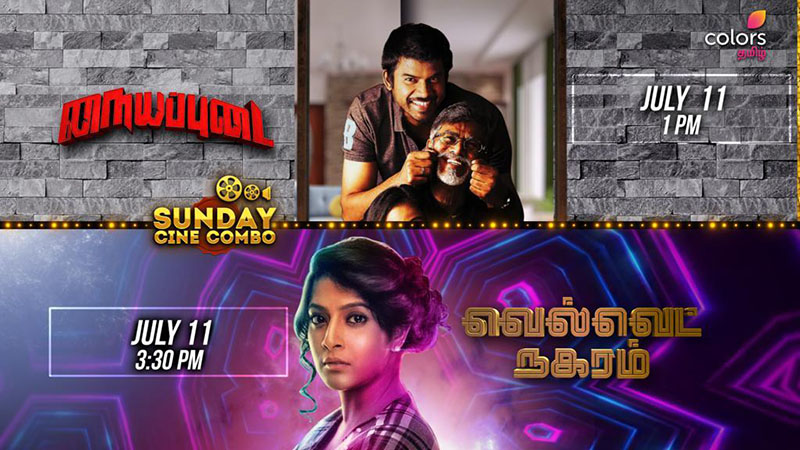 Chennai 8th July 2021: Colors Tamil, the youngest GEC of Tamil Nadu, is all set to excite its viewers with back to back World Television Premieres of two blockbuster movies this weekend. As part of its popular Sunday Cine Combo, the channel aims to get your day off to a great start with Nayyapudai, an action thriller, directed by Vijaya Kiran. It follows it up with Velvet Nagaram, a gripping tale about an investigative journalist. Tune in to Colors Tamil, this Sunday, 11th July 2021, at 1:00 PM and 3:30 PM to watch the two spine-tingling hits.

Nayyapudai’s storyline follows the fights of a retired army officer against corruption, and his role in saving a couple from the clutches of a local don. Essayed by veteran Director S.A. Chandrasekharan, the character Vellaichamy, is a charitable man who takes care of children from impoverished families. His quaint life takes an unexpected turn as he gives refuge to a couple, played by Pa Vijay and Chandini Tamilarasan, who have eloped.

Velvet Nagaram is a psychological thriller starring Varalaxmi Sarathkumar and Ramesh Thilak, and directed by debutant Manoj Kumar Natrajan. The film is based on real-life incidents and revolves around a journalist who traces the mystery behind the murder of an actress but finds herself in a dangerous situation after getting cornered by a bunch of goons. The film has realistic performances and many tense moments. It also boasts of mind-blowing cinematography by Bagath Kumar. With music composed by Achu Rajamani, (known for his album Goli Soda), it promises to be an edge of the seat ride for the audience.

About COLORS Tamil: Launched in February 2018, COLORS Tamil is the youngest general entertainment channel from the stable of Viacom18 that thrives to entertain the Tamil speaking viewers around the globe through distinctive and powerful stories that inspire and celebrate women and their families. Positioned as Idhu Namma Oru Coloru (the colors of our motherland), COLORS Tamil focuses on storytelling that matches the rich heritage of the Tamil Nadu culture with qualitative and innovative programming. Some of our flagship shows are Velunachi, Arya’s Enga Veetu Maapilai, Dance Vs Dance, COLORS Comedy Nights, Singing Stars, Oviya, Vandhal Sridevi, Perazhagi, Thirumanam, Thari and Malar amongst others.

About Viacom18: Viacom18 Media Pvt. Ltd. is one of India’s fastest growing entertainment networks and a house of iconic brands that offers multi-platform, multi-generational and multicultural brand experiences. A joint venture of Network18, which owns 51%, and ViacomCBS, with a 49% stake, Viacom18 defines entertainment in India by touching the lives of people through its properties on air, online, on ground, in shop and through cinema.