Emoji Tamil web series directed by S. Rangasamy has come out as a good romantic watch series. The Emoji web series has been released today in Aha Tamil. The youngsters will receive this web series since it holds love and romance. It is more like the reality of the current youngsters. 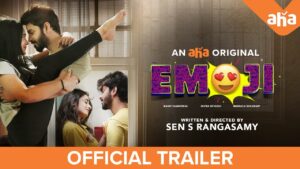 Mahat Raghavendra has done the lead role in the series. He works in a corporate company and falls in love with Maanasa. Their love moves softly, but due to misunderstandings, they break up. Mahat Raghavendra tries very hard to come out of this breakup. Later he meets Devika Sathees, and he finds her a solution for his worries.

Later they both fall in love and get married. They live a good marriage life, but at a certain point, they apply for Divorce. It’s an emotional love story revolving around them who decide to divorce as their passion separates them. Will love unite them? Is the rest of the story.

Sen. S. Rangasamy directs the emoji web series., Jalandhar Vasan has done the beautiful cinematographer with the edit of MR Rejeesh, and R.H. Vikram composed the music. The lead characters in the Emoji web series are Mahat Raghavendra in the lead role and Devika Satheesh, Maanasa, Aadukalam Naren, V.J. Ashiq, Priyadarshini Rajkumar, and a few more.

There is adult content in the movie, so it is not advised to watch the movie with family and kids. Watch the Emoji Tamil Web series on Aha Tamil OTT Platform.