Vijay Deverakonda’s Bollywood debut is devoid of any coherent plot, performances, or action that does not involve the hero strutting in slow-motion.

Liger is one of the most awaited films in recent times. The film has been promoted aggressively and is out now India-wide in multiple languages. Let’s see whether the film lives up to the hype or not. 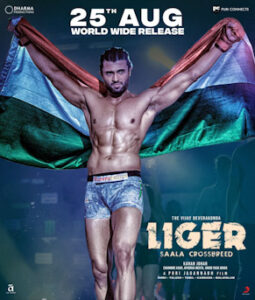 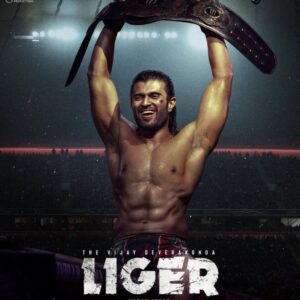 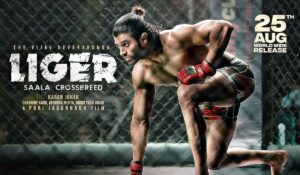 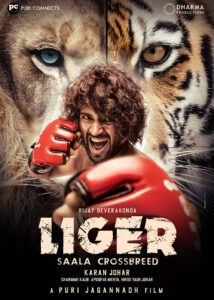 Liger’s(Vijay Devarakonda) only aim is to become a national MMA champion. He and his mom(Ramya Krishna) land in Mumbai to pursue their dream. Liger gets trained in MMA but the twist in the tale arises when he gets cheated on by a rich girl Tanya(Ananya Pandey). The rest of the story is about how a heartbroken Liger gets back in form and wins the international MMA championship.

Vijay Devarakonda does a decent job in his role and his transformation looks good. His stammering act is irritating but he manages it well in the second half. Ananya Pandey does her best in the role of a rich girl but her character is not etched properly.

Ali is decent in his role and Getup Sreenu evokes a few laughs in the first half. Ramya Krishna as Vijay Devarakonda’s mom is good in her role and evokes decent emotions. Ronit Roy is impressive as the coach.

Mike Tyson appears at the end of the film and his cameo has been nicely shot. All his fun scenes with Vijay Devarakonda are nice. The MMA fight sequences have been choreographed well in the film.

Vijay Devarakonda’s stammering act looks good in the promos but does not gel well in the film. Perhaps it is the biggest mistake of Puri Jagan to show him as a man with a disability. The audience who loves Vijay’s free-flowing dialogue delivery will be disappointed as the stammering act is dull.

Liger has a water-thin storyline that does not work. There is no proper conflict in the film and the hero’s journey looks half-baked. The love story is also forced and does not create much interest.

The first half has a proper story and some good songs. But the second half goes for a toss. Vijay’s journey to the US and how he became famous look over the top. There is absolutely no emotional connection in the film and this is where Liger disappoints.

The twist featuring Ananya Pandey looks silly and has not been handled well. The mother’s sentiment is also loud and lacks proper depth. There are no high moments in the film and the audience who wanted to see Vijay Devarakonda as a typical Puri hero will be disappointed.

The production values of the film are neat. The camera work is also pretty good. The music sounds cool in Hindi but when it comes to Telugu, the songs do not sink. BGM by Sunil Kashyap is disappointing in the first half but was good in the latter part. The production design is not that great.

Coming to the director Puri Jagan, he has surely not lived up to the hype created. Once again, he has written and narrated a story in a rush and that is clearly visible on screen. Making the hero stammer does not work one bit.

Puri is known to elevate his hero characters but there are not many scenes that do such in Liger. Bringing Mike Tyson into the narrative looks good but the way the proceedings are ended looks quite silly. The Puri mark dialogues and emotions are clearly missing in the film.

The sports drama created by Puri is also beaten to death and has no freshness. There is no proper villain and this is where the conflict created by Puri does not create much impact. But he creates a few high moments with comedy and evokes some patriotic dialogues which will work for the masses.

On the whole, liger does not live up to the hype created. A wafer-thin storyline, Vijay’s stammering act, and rushed proceedings are basic drawbacks. But there are a few good mass moments and Vijay’s transformation which will be loved by the B and C center audience making this film a strictly passable watch. All we suggest you is to go in with fewer expectations.