So in a way ‘Laal Singh Chaddha’ has been special to Aamir Khan, we could see his love for “Forrest Gump” in the efforts he put into bringing that story and adapting it to our culture, but did “Laal Singh Chaddha’ able to reflect that love of him beautifully with the tools/crafts of filmmaking it got to our audience?? Let’s see.

Story deals with the journey of various stages of the life of an innocent man, Laal Singh Chaddha (Aamir Khan), who is slow-witted, and his bonding with the various people who exist/encounter in his life.

“Forrest Gump” is considered to be one of the finest movies ever made in world Cinema, even today Tom Hanks is known by many only because of that role, so when such a powerful movie is getting remade that too after 18 years, everyone was curious how Aamir, the most successful personality in Bollywood, gonna enact that role, And writer Atul Kulkarni spent years on changing the script according to our nativity it seems, but all these things won’t matter when the movie ends, cuz we’re left with an empty feeling after watching this shallow remake, it’s a lost in translation case. The Makers couldn’t able to translate the soul of “Forrest Gump” affectingly.

There are dark zones where “Forrest Gump” movie leaves a lump in our throat with overwhelming emotions, but Director Advait Chandan made those zones sanitized here, In “Forrest Gump”, the experiences of Forest’s Mother and his love interest get involved with what we can call “amoral” conducts, especially his love interest’s life is very gloomy since her childhood when we see forest comprehending those horrors, we feel for him, we wish he shouldn’t have been there, Now “Laal Singh Chaddha” makers didn’t want those disturbingly dark secrets, so they transform them to same old Sentimental scenes which we’ve been viewing from decades like Mother ready to do the maid work for sake of her child’s study or children struck in suffering because of his/her parents continuous fighting.

All such moments just reduce the earnestness of the soul of “Forrest Gump”, they just kill the intensity of the original. 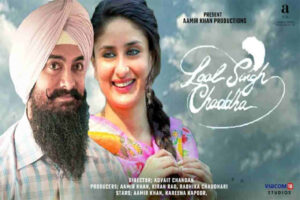 Aamir Khan’s performance in the first hour is the only saving grace of the movie to an extent, that too feels overdoing/ ineffective in the second hour, it’s time for Aamir to stop doing such kinda intellectually disabled roles, it was refreshing in Dhoom-3, and it was great in PK, but here it just feels repetitive, and we just can’t empathize with his character, his histrionics feel artificial after a time.

Kareena Kapoor as Rupa, Laal’s Love interest, is just okay, maybe because of the poor transformation from the original to here, Her character lacks the emotional depth compared to the original, and she couldn’t evoke extraordinary emotions in us with that weak characterization and her very middling performance.

Director Advait Chandan starts the movie on a very promising note, the child episodes of Laal do hold your attention, but when he slowly starts to unfold the story, his narration bites the dust, and the drama feels all over the place, even Naga Chaitanya Cameo as Balraju, Laal’s Friend, couldn’t elevate the proceedings altogether for a moment, it was so flat, the Joke about his family profession doesn’t land, and instead it was irritating.

Music by Pritam and Score by Tanuj Tiku is Okay, none of the songs/bgm are that memorable, cinematography by Satyajit Pande was beautiful, the visual richness shows the makers didn’t comprise in spending the money, Editing by Hemanti Sarkar could’ve been better in joining the narratives of Laal’s life.